TfL Overview
We are proposing to make improvements to pedestrian and cycling facilities around the junctions of Addison Road and Warwick Road with Kensington High Street.
The location has been the site of an above average number of collisions in recent years, many of which involved vulnerable road users. Both junctions are used by high volumes of commuter traffic in west London, as well as by pedestrian visitors to local amenities such as Kensington Olympia Conference Centre. In response to the high collision rate we have worked with the Royal Borough of Kensington and Chelsea to develop a set of proposals that would provide safer crossing facilities at both junctions as well as improvements for cyclists.
The proposals form part of our programme to enhance safety for vulnerable road users on the Transport for London Road Network. 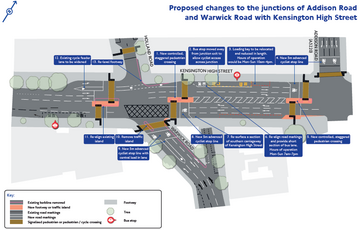